Good afternoon, everyone and thank you all for joining us today at the UN Conference Centre.

It is a real pleasure to introduce you to Deputy Secretary-General Amina Mohammed, who brings the UN global commitment, to support Thailand’s continued progress on the SDGs.

In turn, Madam Deputy Secretary-General, it is also a privilege to introduce leading representatives of Thailand’s private sector, bankers, and investors, as well as the key government regulator – who proactively support the agenda of sustainability.

Over the past year, we have come together, and made progress on commitments to reduce carbon emissions and supporting climate financing.

Members of the Global Compact Network Thailand have committed to achieve net-zero greenhouse gas emissions by 2050, which raises ambitions for the entire country. This will result in reductions of 7 million metric tons of carbon emissions every year, which amounts to nearly 2% of total Greenhouse Gas (GHG) emissions for the country.

Bankers, and investors are also working with the UN to ensure that environmental, social and governance parameters form the basis for investment, as they also adopt UN principles for responsible banking and investment. The Government Pension Fund (GPF) is at the forefront of this by leveraging its technical capacity to model ESG scores.

Madame DSG, as I mentioned to you earlier, Thailand leads the region and global average on women CEOs with nearly every other CFO being a woman.

That leadership is here today, with the chief of the Security and Exchange Commission (SEC) Khun Ruenvadee, Secretary-General Khun Srikanya of the GPF, and Dr. Wandee, who is a pioneer entrepreneur on solar farms. These women are at the forefront of gender equality and advancing the Sustainable Development Agenda.

In the context of the Cooperation Framework, the UN Country Team in Thailand is seeking to lift its partnership with the private sector, the capital markets and the government. Madam DSG, we have just begun to explore the possibility to establish a pooled funding mechanism to support sustainable development in Thailand, which can bring to bear the expertise of the private sector, government, and the UN as we accelerate the advancement of SDGs.

Today is an opportunity for us to hear from you Madam Deputy Secretary-General as a thought leader on the 2030 Agenda, and also to have an honest exchange of ideas with our partners on what more the UN can do to help fast-track efforts in support of GHG reductions.

Let me now turn to Khun Suphachai to set out the big picture on the role the private sector is playing in advancing climate action. 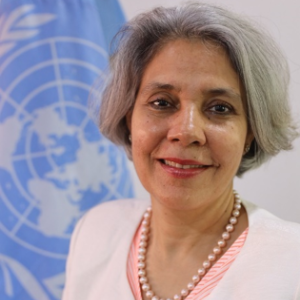